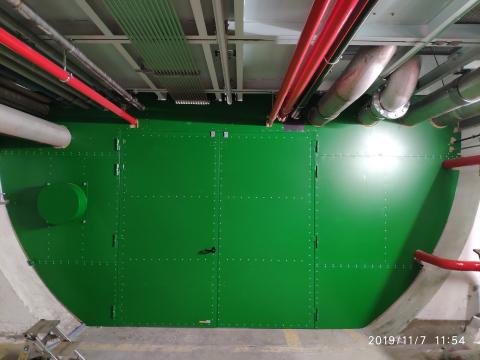 One of the new fire doors installed at the SPS during LS2. You can also see the sprinkler pipes (in red at the top of the image), the fire detection system (the aluminium pipes at the top) and the dry risers (in red on the right) (Image: CERN)

Original article published in the CERN Bulletin on 10th December 2019

There’s never a dull moment at the Super Proton Synchrotron (SPS) during the second long shutdown (LS2) of CERN’s accelerator complex. In addition to the upgrade of its acceleration system and the installation of a new beam dump, the SPS is also being equipped with a state-of-the-art fire protection system.

A study carried out in 2015 and 2016 highlighted the fact that the fire protection equipment in the SPS, which had been in place since the accelerator was commissioned in 1976, was no longer appropriate for the current specification of the machine, nor did it comply with modern fire safety standards.

The SPS-FIRE project was launched in 2016 by the Director for Accelerators and Technology, Frédérick Bordry, and was entrusted to the BE department, working in close collaboration with the HSE unit and the EN and SMB departments. The project is being carried out during LS2 and aims to consolidate and update the fire protection equipment in the SPS. “The project focuses on four essential aspects of fire protection: detection, containment, automatic response and manual response,” explains Ronny Billen, head of the SPS-FIRE project.

A new aspirating smoke detection system has been installed in the SPS tunnel. Capable of sucking in air from up to 700 metres away, this system can detect a fire extremely quickly, as soon as the very first smoke appears. “The data gathered by these devices is processed by a centralised control system that can automatically trigger the closure of fire dampers and doors, shut down the ventilation and start an evacuation,” continues Ronny Billen. “A vocal alarm system will allow announcements to be made by loud-speaker to make it easier to evacuate personnel, which will be much more efficient than the current sirens.”

Significant work is also under way to install a containment system. Until now, the SPS tunnel wasn’t split into compartments, a layout that can stop a fire from spreading. No fewer than 50 fire-resistant doors and partitions are therefore being installed during LS2, at the entrance to the SPS’s six access shafts and around hazardous areas of the machine. In the event of a fire, the ventilation system will also be shut down to stop air flow and reduce the propagation of smoke.

In the long straight sections, the technical galleries and access shafts, which are all more vulnerable to the risk of fire due to the large amount of equipment present, fixed automatic water extinguisher installations, i.e. sprinklers, are being installed. “The sprinklers are very effective because they allow us to control an outbreak of fire quickly, before the Fire Brigade arrives,” emphasises Ronny Billen. The project also aims to make operations by the Fire Brigade in the tunnel easier and safer. To this end, dry risers are being installed in the six access shafts, around the entire circumference of the accelerator and in the TT10 and TT20 transfer lines. It will thus be possible to supply firefighters with water quickly wherever they are. “We have also put in place additional equipment trolleys for the Fire Brigade at the bottom of each shaft, with compressed air foam fire extinguishing systems, breathing apparatus and ventilation devices,” concludes Ronny Billen.